K&C Music was formed in 1985 by Tom Kennedy and Jack Casey.  After working as teachers and other rental companies, they saw an opportunity to better serve the needs of music educators and families.  Tom and Jack believed that just renting an instrument wasn’t enough and put their efforts into attentive, personal service.

After a long working relationship together, Tim Bowditch purchased K&C Music from the Casey Family Trust in 2021.  Tim was an All State trumpet player in High School and has been involved in music education and retail since he graduated from New England Conservatory in 1998. He brings a wealth of experience and optimism to the business and is excited to lead K&C Music into the future. 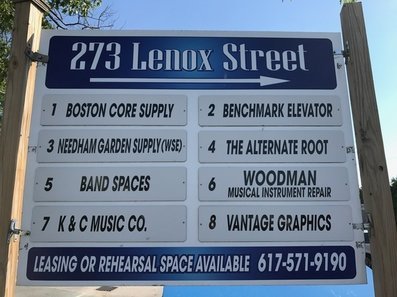 The driveway to the K&C Music building is located next to the sign for Jim's Automotive Center.
Follow drive then take a right then a left. The K&C Repair Shop and offices are located to the right.

We would love to hear from you! Please contact us if you have any questions concerning rentals, repairs, instrument and accessory sales or your rental account information.
]